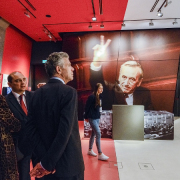 On opening of the Honorary Consulate of the Grand Duchy of Luxembourg in Sopot with the seat in Gdynia, the Honorary Consul of Luxembourg Tomasz Kopoczyński was privileged to play host to the Ambassador of the Grand Duchy of Luxembourg, His Excellency Georges Faber. The two-day visit (16–17 October 2014) abounded in meetings with Pomeranian officials and was crowned with the opening ceremony of the Consulate.
END_OF_DOCUMENT_TOKEN_TO_BE_REPLACED